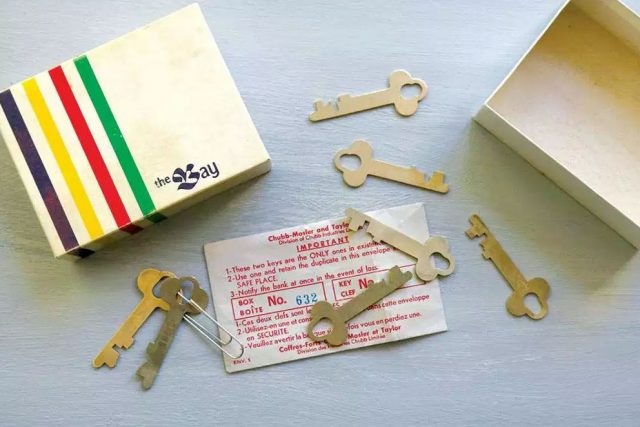 My mother-in-law passed away recently. It was sudden and unexpected. We had taken her shopping for her monthly grocery haul two days prior, and I had been feeling guilty about not having the chance to call her before jetting off to a four-day assignment in Mexico in early January—I had already written her a postcard when my husband, Mike, called.

Shirley lived alone, by choice. Her small duplex was full of trinkets—a neatly organized clutter of photos and mementos of everything she valued in her life. When we returned to the now-empty house, Mylar balloons saved from her 83rd birthday party less than a month before slouched against a wall. (When the balloons were completely deflated, she would flatten them and store them in one of her dozens of albums.) There were still slices of cake in her freezer.

I sat at the dining room table and flipped through her recipe box of address cards, calling the old friends and relatives she talked about the most, to give them the news.

It’s an exhausting and invasive thing, one brimming with anxiety and nostalgia, to sort through someone else’s lifetime, to clear out her fridge and bathroom and underwear drawer, to decide what should go in the garbage, what can be given away, what would wind up stored in boxes in our own basement for someone else to find. There was only Mike and me to plow through it all.

On the surface, everything was familiar, most of it having been in the same place for the 30 years I’d known Shirley. A lot of it came from me. In her absence, however, it all seemed otherworldly. We began pulling back wool blankets that had been nailed over storage shelves and explored long unopened boxes in the recesses of the basement. Shirley had saved everything: every

Christmas and birthday card of her adult life, sets of the Encyclopedia Brittanica, stacks of National Geographic, decrepit old dog toys (the dog died 20 years ago). This is perhaps not unusual for a child of the Depression, who recalled her mother spreading tinned peanut butter on slices of homemade bread to hand out to hungry men coming off trains to look for work in rural Saskatchewan. There were things hidden under other things—a side table in the spare bedroom revealed itself to be a tablecloth-covered filing cabinet. We unearthed report cards and bank statements last seen in Mike’s grandfather’s garage in the 1920s, old newspapers, high-school yearbooks and love poems, the Planet of the Apes and Evel Knievel action figures of Mike’s childhood, evidence of a previously unknown marriage and an original Pong game. And once in a while, we came across long, flat keys.

There were plenty of old house, bike and car keys, but these were different from the rest. They had numbers stamped on them. We knew peripherally that Mike’s dad had had safety deposit boxes, but had no idea where they were or what they contained. There was talk over the years that some of them had been inherited from his uncle, who passed away in the 1990s—but we hadn’t asked enough questions. They weren’t talked about, and questions often came across as suspicious. Mike’s dad was the beneficiary of the estate, but he has been in long-term care for over a decade. He hadn’t retained many details regarding the boxes nor, we suspect, ever shared specifics with Shirley, who after decades of rarely being privy to the financial aspects of their marriage, eventually wound up with Power of Attorney over their affairs. In short, a complex web of trip-wires lay between us and sorting out the estate.

The Increasing Number of Private Safe Deposit Centres in the UK