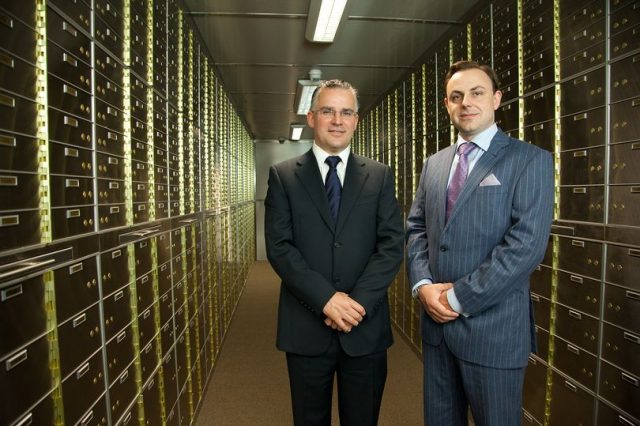 Europe’s Largest Independent Safe Deposit Box business to open in Nottingham, England in March. This will be the companies fourth UK Facility, with other facilities in Glasgow, Newcastle and Liverpool.

A £1m storage vault where valuable items can be locked away is set to open in a Lace Market basement.

Planned within a multi-storey building, in a secret location, customers will be able to pay to keep valuable belongings, such as jewellery or important paperwork, locked away.

Customers will also be able to trade gold bullion in the facility which is being called Nottingham Vaults.

The exact location can’t be revealed for security reasons.

Having already opened vaults in Dublin, Glasgow, Liverpool and Newcastle, co-owner Seamus Fahy expects the Nottingham branch to be popular.

Company bosses set up a website two years ago advertising such a facility in Nottingham, so customers could register their interest.

Mr Fahy, 50, of Limerick, in the Republic of Ireland, said: “Immediately we saw huge demand because people were filling out the online forms, saying ‘as soon as it’s open in Nottingham, please contact us’.

“Very quickly we knew there was going to be demand for a safe deposit box facility in Nottingham.

“Then it was the tough decision of finding the right location. We wanted a secure, safe location in an anonymous building so people could come and go, without anyone knowing where they were visiting.

“We’re in the Lace Market area, we’ve found a basement and we’ve installed a purpose-built vault which exceeds bank standards.

“The vault itself will hold several thousand boxes when it’s full.”

Things to consider when choosing your safe deposit box facility.

Why is it not worth storing valuables in an apartment or at home, even...

Keep your identity safe from theft with a safe deposit box…