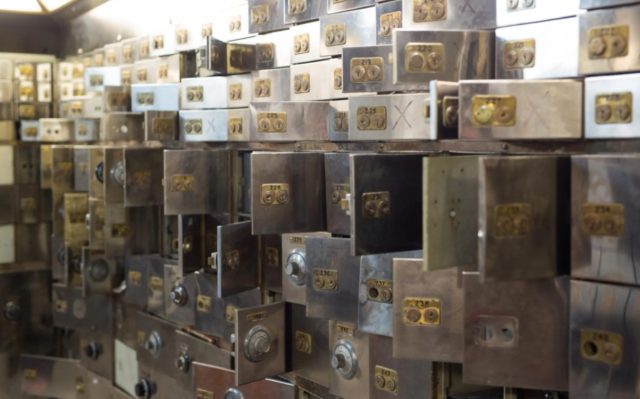 Demand for safe deposit boxes is surging as nervous savers fear banks could start to charge them to use accounts.
But potential customers face a shortage of supply and a shrinking pool of options because banks are withdrawing the service or closing it to new customers.

The number of internet searches for “cash deposit box” jumped by around a quarter between July and September. Demand for vault storage services could increase further if interest rates turn negative, as the Bank of England has recently threatened, and people are put off from holding cash in a bank account.
Some savers may decide to put their money into other valuable assets such as gold or antiques and will want a safe place to store them.

In Switzerland, where interest rates have been negative for the past five years, there has been a big increase in demand for safe deposit boxes in which people can store their cash or gold, said Christopher Barrow, of Metropolitan Safe Deposits, a London-based vault provider.

Swiss franc denominations include Chf 100, 200 and 1,000 notes meaning savers can tuck away a tidy sum in a deposit box.
Neither HSBC nor Barclays has offered safe deposit boxes for the past five years or more. NatWest still has them in a small number of branches, but they are available for existing customers only.

Lloyds Banking Group, which also owns Halifax, closed its safe custody service to new customers in 2011. It now has just two storage facilities – in London and Manchester – with boxes solely for the bank’s customers. Cash should not be stored in them. New customers cannot currently book an appointment to open a safe deposit box with Lloyds, as they have been suspended during the pandemic.

As banks have closed swathes of branches to cut costs, it has also affected people relying on them for safe storage, said Martyn James, of complaints service Resolver.
As a result, alternative providers have been inundated. Metropolitan Safe Deposits has been receiving hundreds of new customers each month for more than a year.

“There is a big supply shortage. Lots of families are unable to secure a vault near to where they live or work,” said Mr Barrow. “We’ve had a record year so far, perhaps because people have become more nervous about the safety of their wealth during the pandemic.

“Coronavirus has widened the divide between the ‘haves’ and ‘have-nots’. I suspect a large proportion of the former have been putting money into gold bullion because they are nervous about the economic situation and now need to store it.”
Two of his branches are nearing capacity, and between March and June the firm was unable to accept any new customers while it made access to the vaults Covid-secure.

How safe are they?

Mr James warned that anyone taking out a deposit box with a company that was not a bank should make sure it was legitimate. “Some are not regulated or covered by the Financial Ombudsman Service, so you wouldn’t be protected if anything went missing,” he added.

Mr Barrow advised people taking out a safe deposit box to look on Companies House to check that the people running the company were reputable. “You have to be sure you can trust the people looking after your worldly possessions,” he said.
People should also bear in mind that not all providers insure the items held within their boxes or vaults. Both NatWest and Lloyds, for example, tell customers they are responsible for insuring their valuables.

“Lots of customers don’t buy their own insurance and so have no evidence of what was in the box initially,” said Mr James.
Some customers who have approached the Ombudsman about supposedly lost items have had their complaints rejected because it could not award compensation based on the person’s claims alone.

Unlike with cash held within a bank account, customers cannot claim back up to £85,000 from the Financial Services Compensation Scheme lifeboat fund should their safe deposit box provider go bust.

Mr James added that, as deposit services had been cut back, some providers had made only cursory attempts to contact their customers about collecting boxes. “They get in touch via the address on file, but some people inherit boxes or leave them for years and forget about them, so often they have moved house and items get lost,” he said.

How much do they cost?

Providers usually levy a flat monthly or annual fee. Lloyds charges from £200 per year for a small box, up to £475 per year for its largest size. NatWest’s prices start from £132 per year.
Metro Bank offers safe deposit boxes in five different sizes. They cost between £240 and £750 per year, however customers cannot keep cash in their box. Metropolitan Safe Deposit’s boxes cost from less than £100 to more than £2,000 for a year. The cost includes up to £10,000 of insurance.

Some providers charge people extra each time they want to view their items.

The future of Private Vaulting in Canada